Of the house that is. And I went into the backyard. Of Haugesund. Which is basically a large nature reserve with lakes and mountains. But I will start at the beginning. First I walked down-hill to the busstation. From there I took a ten-minute ride on the bus. And then I walked. Uphill. For two and a half hours! 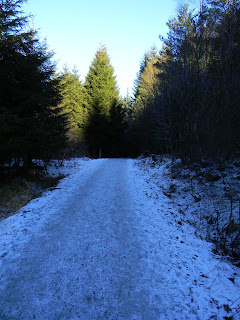 The path started off smooth and nice and there were even streetlights. And then the streetlights stopped and the path got progressively worse and pebbly and stony. And as I said, it was uphill. Now, I wasn't really sure where I was going. I figured if there was something at the other end of the path I would see it and then go back the same way. Or, I would find a name that was familiar and go there. Which was what happened in the end. I walked to the end of the path to Kroken Lake (I think), turned back and headed up to Steinsfjellet. Which is where I wanted to go anyway, even if I did know it was uphill.

The surroundings were beautiful though. Not a sound to be heard, other than the occasional bird or the whistling of the wind. Oh, and the water of course. Because even though the brooks and creeks were all frozen over, you could still hear the water running and babbling beneath the ice. The path was quite tricky at times, especially the bit up Steinsfjellet. I had to cross a bridge and from there on, there wasn't so much a path as a way up I suppose. At times I wasn't sure where I was supposed to go, but I just had to follow the tracks made by others.

The way up was made even more difficult by the water. Because that has a habit of running down. And of freezing when the temperatures are below zero. And I had to go up. I managed to stick mostly to the rocks and stones though and made it safely to Steinsfjellet. From where I had an amazing view over Haugesund and its surroundings. This time in the bright sun.

From there however it was another 2,5 km hike. Granted, the road was a proper road and it was all downhill, but I think I will sleep very soundly tonight. And I guess I am lucky I am a busdriver: I sit down for a living...
Written by Mara at 18:11