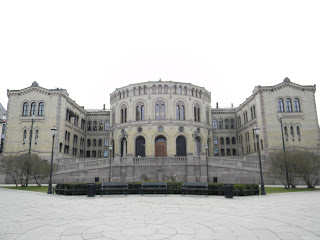 
When I was in Oslo in April of this year, I visited the 'Storting' or the Parliament. A lovely building smack bang in the center of Oslo. And because it was Saturday they had some guided tours going. It didn't cost anything, but there were only three of them that day. I managed to get on the second tour.

The first thing we had to do was go through security, leave bags and coats (but not cameras fortunately) and wait for the guide. She was a lovely young woman who spoke perfect English and since most people on the tour, including the Norwegians themselves, spoke good English, the tour was done in English and Norwegian was only used for one family with some young teens.

It was a very interesting tour that gave a little insight into Norwegian politics. So, if you are ever in the area: try and take a tour (Saturdays only).

This is the letter S for ABC Wednesday. Why not join?
﻿
Written by Mara at 07:00