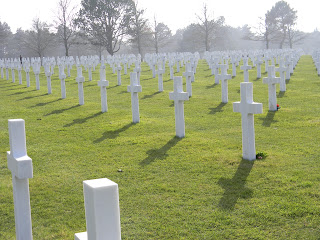 
During my trip to Normandy in March this year, we visited several cemeteries. The trip had been organised after the (mainly) boys and young men had asked why they were part of the honour's guards on May 4th, which is Remembrance Day in the Netherlands. They certainly found out why: beaches, tanks, planes, guns and many many crosses, all dating from WWII.

The first photo shows the American Cemetery near Omaha Beach. Row upon row of white crosses and an occasional Star of David. Underneath every cross lies one young man who died in pursuit of freedom for everybody, be they 'different' or 'normal'. The second photo shows the German Cemetery near La Cambe. Row upon row of small greyish flat stones. Underneath every stone lie two to three young men who died in pursuit of one big Germany and only one type of 'normal'. 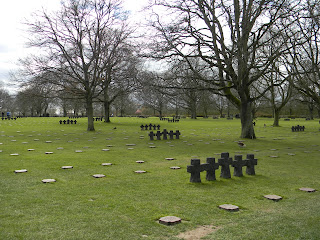 In contrast to the American crosses, the German stones bear both name and age of the people underneath and what was the most shocking was the ages of the soldiers: about the same age as the young men and women on my coach. It certainly hit home for them.

This is the letter C for ABC Wednesday. Why not join?
Written by Mara at 07:00