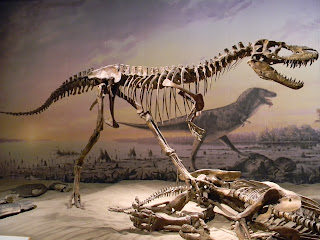 
My friend Kay had invited me to show me around Alberta when I was in Canada in October 2011 and on our second outing she took me to see the Badlands, which are in the East of the province. Since we had her dog Lindy along as well, we couldn't go to the museum in Drumheller, but two days later I went back to the Badlands and I visited the museum.

I have never been a dino afficionado, but that museum was something different. It was fantastic. All the dinosaurs had been found in the province and there were so many different ones, it was mind-boggling. They had even opened up a wall so people could see right into the preservation area. One of the researchers was there trying to clean up some unsuspecting fossil and he got asked a lot of questions as well.

If you are ever in the area, go and see this beautiful museum, it is fantastic!

This is the letter D for ABC Wednesday. Why not join?
Written by Mara at 07:00