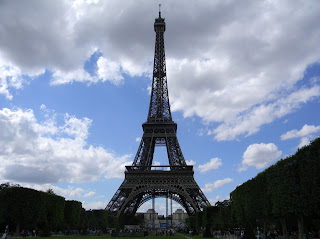 
This iron tower was erected as a the entrance arch to the 1889 World Fair held in Paris. The original design came from Maurice Koechlin and Émile Nouguier, both senior engineers for Gustave Eiffel's company. At first Eiffel himself didn't really like the proposed tower, but in the end he was won over. After proposing the idea to the people behind the World Fair and winning over all the other entries, the tower was built.

The tower was only supposed to be there for a limited amount of time: the duration of the World Fair plus some twenty years after. It was always the idea that it would be torn down again. However, by the time it was due to be torn down again, it was already quite famous and the radio had made a big entrance. The tower could now serve a dual purpose: be a tourist attraction and a huge radio antenna.

It is now (not counting the antennae on top) the second highest man-made structure in France, after the Millau viaduct and measures 320 meters (an awful lot of feet). I have never climbed it yet, but one day...

This is the letter E for ABC Wednesday. Why not join?
Written by Mara at 07:00