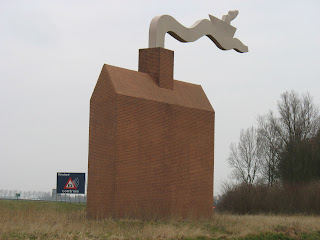 This is called the Little Polder House and is a piece of landscape and motorway art. It was only after it was erected that they realised the size of the house fitted perfectly in the NOP. The short sides of the house are three meters and the long sides are eight meters. The plots of land given out to the first farmers were three hundred by eight hundred meters or a multiplication by two or three of that.