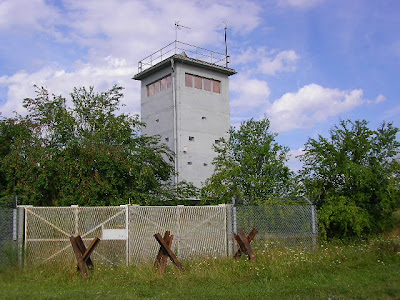 
A few years ago I did a trip through the Frankenwald area of Germany. An area in former West-Germany bordering former East Germany. There were still quite a few reminders of that period in German history. An ugly tower near the hotel we were staying in which was used by West-Germans to wave at their friends and relatives on the other side of the border, large fields without any boundaries (or so it seemed) on the Eastern part, drab grey houses (still) and this tower.


Germany was divided in two after World War II. Berlin was part Russian, American, British and French. The first part was Eastern, the other three Western. But not only Berlin was divided by the so-called Iron Curtain. The rest of the country soon followed. The border ran through villages, rivers and wooded areas and of course caused a massive upheaval on both sides.


The border was 1381 kilometers (858 miles) long and was mainly used to keep East-German citizens in instead of West-Germans out. The borders with Poland and Czechoslovakia were not fortified, since those countries were considered 'friendly', but even for those countries you would need permission. 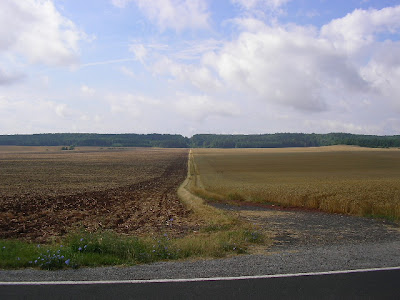 The border runs through the indentation in the woods in the distance, continuing for miles and miles!


Basically the border consisted of a wide stretch of open land which in later years were also fortified by minefields (anti-vehicle and anti-personel). It was hard to cross those stretches, but even if you managed to do that, you weren't out of the woods yet. The towers were placed at certain distances, and the people guarding the border didn't hesitate in using force(read fire-arms). The fences were made higher over the years and were almost impossible to cross. But even with all those problems facing people, they still tried to escape. If they did manage to get across, they were granted West-German citizenship automatically.


In 1989 the border was finally broken and people from both countries were free to travel between the two states. A year later, the two countries were unified and that signified the official end to World War II (yes, really!). Most of the hated Iron Curtain was taken down within the year following its opening, but some parts remained. As a reminder. The photo at the top shows one of the watchtowers, the second photo the look from the watchtower. The towers would be placed at intervals of about 1 kilometer and the border guards would be able to see each other quite clearly.


Nowadays the whole of the East-West border, both in Germany as well as between other Eastern and Western countries is a very special place. Because of its relative solitude from 1945 onwards, animals and plants had mostly been left alone and have created a haven with some rare species amongst them. In recent years, environmental groups (mainly from the Eastern countries) have worked extremely hard to make the whole former border a national park and they are succeeding quite well. So in the end even some good has come out of that bad period.


For more information about the Inner-German border please check out this Wikipedia article.


For more W words please check out ABC Wednesday and join in the fun.
Written by Mara at 00:02