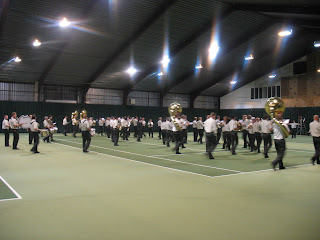 The band going through their paces


Part of my job is driving military personnel around. We pick them up at the various bases around the Netherlands and take them to a variety of destinies: amusement parks, military shooting ranges, other bases both in the Netherlands and abroad etc. As soon as I arrive on any base I have to identify myself and I'm not allowed to take any photos. The photos I took of those helicopters were allowed, I mean, if plane spotters (or anoraks) and the press can take photos, then I certainly can. Normally though, I don't take any photos. I don't plan on getting fired, just because I see a lovely butterfly sitting on a tank! 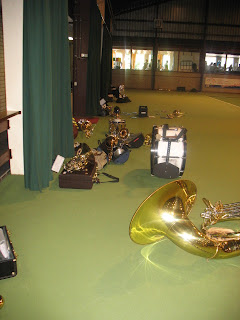 
Today I had to take a band to a sports centre, where they were going to practice. You always see those military bands in tattoos and during official things with heads of state and so forth, but you don't really get to see how they train for that. So today I took up a nice central space in the tennis hall and watched them muck it up! Well, the first time anyway, after that it became a lot easier and it looked massively better! 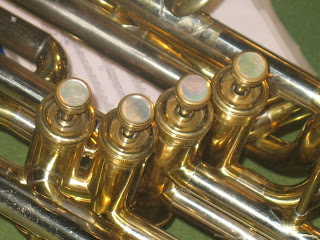 Detail of a tuba. Look at the Mother of Pearl buttons


Of course it did help for me that I love brass music and they are quite a good band. However, not everyone was playing, some did have their instrument but apparently thought it was a bit heavy (like the tuba or the big drum) to carry around ALL the time. Others didn't even have their instrument with them and just walked around with the notes and the music in hand. It was great fun to watch and good music to boost! I even heard some Tom Jones...
Written by Mara at 19:44