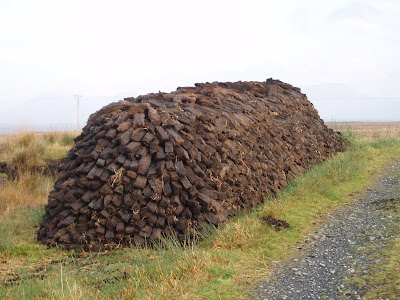 
Sometimes probably known as peat, but that doesn't start with a t! Turf is still found all over Europe, although some countries have stopped digging it up now (like the Netherlands). However, Ireland still 'harvests' it, both for personal as well as for industrial use. My sister and I found this little mountain of turf in Connemara (Co. Galway). It was probably made by a local (quite a few still own turf-patches) and that local would use this turf to heat his home. It has a very distinct smell (which I love) and you can smell it in most small towns and villages when driving through.


Turf is centuries old and is made up of old leaves, trees, grasses and sometimes animals and even humans have been found in the peat. Imagine an outside swimming pool beneath the trees. Fill it with clean water and leave it be. Every year, leaves will fall in, bugs and small animals will drown in it and slowly over the years a deposit is formed on the bottom of the pool. That deposit gets thicker and thicker until (after centuries), the lake/pool/pond has become a marsh. Wait another few centuries and you can walk on that marsh without sinking (it's very springy now). The peat can now be harvested. First you need to cut it. The slabs are roughly the same size, regardless of country of origin. Those slabs need to dry out and are therefore left in small groups of up to ten slabs or in small mountains like this one. During the autumn they are picked up and taken home where they can be used to heat the home.


Nowadays most industrially harvested turf is compacted into 'bricks'. This way they are even more energy efficient! Some fields are even used to power electricity plants! If you ever drive through Ireland and see a mountain of turf, don't hesitate to pick one of the slabs up and examine it, you will find it quite dry, even if it's pouring down with rain! You can see the sticks, leaves and(if you're lucky) perhaps even a bug. However, don't forget to put it back, someone has worked hard for it!


For more t-words, please check out ABC Wednesday.
Written by Mara at 00:02