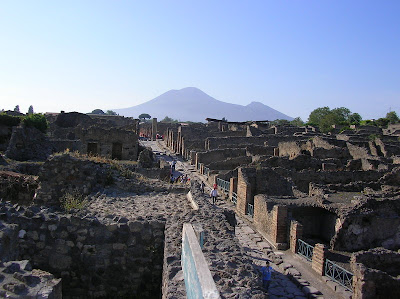 
The Vesuvius is a volcanic mountain in Southern Italy. It's known best for the eruption in 79 aD which covered Pompei (which you can see in the foreground) and Naples (or as it was then known Ercolano). Pompei was covered in ash and people were suffocated to death. There are some really good accounts as to what happened on that fateful day, most notable by a writer called Plinius (the younger I believe), who was in Pompei, but managed to get out on time and saw the whole thing unfold while on a boat.


People in those days didn't know what a volcano was. They had never heard of one. The mountain smoked on occasion and there had been earth quakes as well, but the idea of a mountain spewing fire and ashes was completely novel to them and didn't enter their brains for a second. When the mountain finally erupted, most people thought it was angry gods and one in particular: Volcan, the God of Fire.


The Vesuvius hasn't died yet, there is still a very good chance of a massive eruption. In 79 aD there were plenty of people living in its vicinity (death toll then ranges between 10,000 and 25,000 people), in 2009 the death toll could be many times that number. Pompei is a small town adjacent to the old site and about 25,000 have their home there. Naples is many times bigger and according to official listings, nearly a million people call Naples home. It could be a massive disaster!!


However, when I was there, the mountain was quiet, no smoke to be seen, other than forest fires in the area and people climbed all the way to the top to peer into the crater. It's quite a steep and horrid road to get to the parking lot, but it is definitely worth doing.


For more V words, please check out ABC Wednesday and join in the fun!


PS: I promised in my U-post last week to post a photo of me in my bikini-uniform. Scroll down to Monday and you will find it!
Written by Mara at 00:02