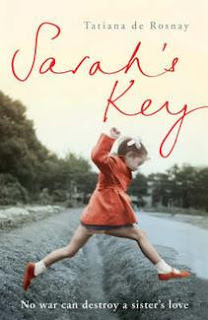 The blurb: Paris, July 1942. Sarah, a ten-year old girl, is taken with her parents by the French police as they go door to door arresting Jewish families in the middle of the night. Desperate to protect her younger brother, Sarah locks him in a bedroom cupboard - their secret hiding place - and promises to come back for him as soon as they are released.

Sixty years later, Sarah's story intertwines with that of Julia Jarmond, a journalist investigating the round-up. Sarah's Key is an emotionally gripping story of two families, forever linked to, and haunted by, one of the darkest days of France's past.

The first time I started reading this book, was when my dad handed me a Dutch copy he had borrowed of a friend. But, I don't like reading in Dutch and I couldn't get past the first chapter. Fortunately Pepperfly then gave the English version to me and I sailed past the first and subsequent chapters.

The story is a mix of real events (the round-up, the Vélodrome d'Hiver, the camps) and fiction. One story follows Sarah, a ten-year old Jewish girl, the other follows Julia Jarmond, an American journalist married to a French man. But at some point those two stories become one, because the place where Sarah lived, later became the home of Julia's French family. She then wants to find out exactly who the people were that lived there, where they went and how they ended up.

This certainly isn't a book for a lazy afternoon on the beach; I couldn't keep my eyes dry! But it is a very good and certainly very confronting book. It could have done with a little less relationship trouble for Julia, but I guess in the end it is necessary for the story.

My verdict: definitely worth the read!
Written by Mara at 14:22