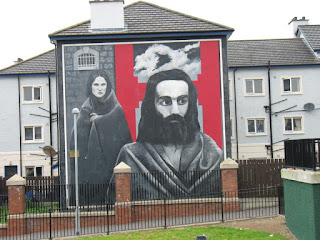 
A few years ago during a visit to (London)Derry with my sister, we went on a tour on one of those open double decker buses. Since Derry is in Northern Ireland it has seen its fair share of troubles between Protestants and Catholics and Bloody Sunday actually took place here. In the Catholic neighbourhood there were several murals depicting either Bloody Sunday or other scenes that took place during the Troubles. The photo above shows the hungerstrikes. 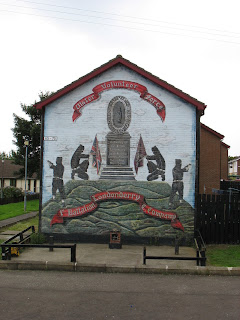 The tourbus also drove through the Protestant area and in that area the murals were of a completely different tone. They were (to me) a bit unsettling, because they felt more militant, more agressive. As if the Protestants still felt superior to the Catholics.

For more M words from around the world, please check out ABC Wednesday and join in the fun!
Written by Mara at 22:24