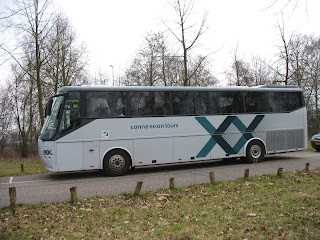 
Bus: Vehicle fitted with more than 8 seats, not including the driver.


Early buses were horse-drawn and seated only small numbers of people. In the 1830's steam-powered buses arrived on the scene. And with the arrival of electricity trolley buses were invented (a combination of an ordinary bus and a tram or train. It ran on the road, but followed the powerlines). It wasn't until the late 19th century that the first diesel-powered bus arrived on the roads, but from then on, it definitely took off.


The bus is still the most widely used form of public transport IN THE WORLD. Many places are only serviced by buses, because of a variety of reasons, like mountains being in the way or not enough passengers to maintain a train-service. 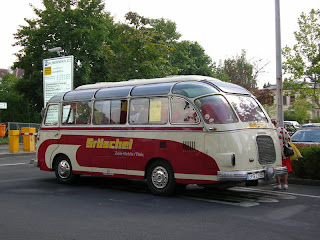 
From the fifties onwards, tourbuses (coaches (GB), autocars (F), pullman (I), touringcars (NL)) became more popular. The war was over in Europe, rationing was a thing of the past and people had more and more money to spend. Visiting other places became easier and the tourbus was the preferred mode of transport, also because cars weren't around that much yet.


The tourbus is still going strong. On board toilets, fridges, bars, video (dvd) and even beds, make life easier for the passenger. You can relax, look out, chat, sleep, watch tv and all without the fear of being pulled over for being a 'dangerous driver'. Why not give it a go sometime?


And if you ever see me? Blonde, black cap (usually) and in uniform, driving the big xx-coach, why not come over and say hi! I will show you my bus...


For more A words from around the world, check out ABC-Wednesday and join in the fun!
Written by Mara at 00:02