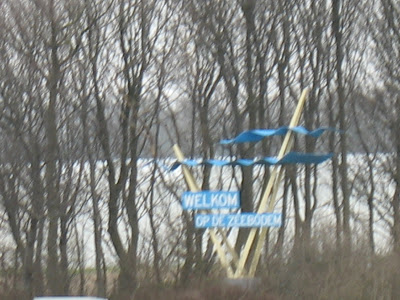 Welcome to the bottom of the sea 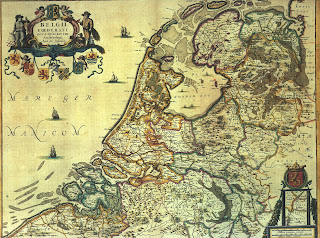 The situation in the past, the red cross shows where I live now, click to enlarge to see!


In the nineteenth century the population of the Netherlands was growing and there wasn't that much space. So, the ideas of closing the sea and turning it into a lake and making land in that land were taken out of the cupboard again. It wasn't the first time this was thought of and indeed it wasn't the first time it was done. Most of the west of the country used to be water at some point or other, before being dried out by man (and windmills) and put to use as land. But this was going to be the most ambitious project yet!


The first thing they needed to do was close off the sea. It was only an inland sea, but it had an open connection with the Waddensea and the Northsea beyond. After a massive flood in 1916 parliament finally passed the law to close it off (it had been on the shelf for 30 years) and work started in 1920 on the Amstelmeerdijk. When that was finished, work started on the first and only Zuiderzeepolder: Wieringermeer, named for the island Wieringen which would be incorporated into the new polder*. Work was finished in 1930. Two years later the Afsluitdijk(Closing Dyke) was finished, turning the salt/brackish water of the Zuiderzee into the fresh water of the IJsselmeer (Lake IJssel). The sea was no more... 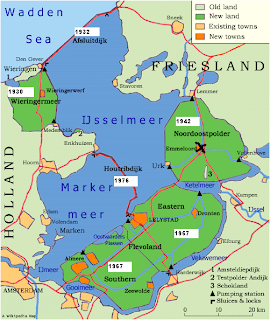 The current situation with the finishing dates; the little black cross shows where I live.


The Noordoostpolder (North East Polder) was the first IJsselmeerpolder and was finished in 1942. It incorporated two islands: Urk and the empty Schokland. After the war two more polders were formed: Eastern Flevoland and Southern Flevoland, the last being finished in 1967. In 1976 a dyke was created so a new polder could be formed (Markermeer), but during the 1980's those plans were put on ice indefinitely.


For more information please check out this Wikipedia article.


For more Z-letters from around the world check out ABC Wednesday and join in the fun!


*) Polder: tract of low land, especially in the Netherlands, reclaimed from the sea or other body of water and protected by dykes. In the olden days kept dry by windmills, nowadays more usually by diesel operated pumping stations.
Written by Mara at 00:02