Spiderhead mill. Used to irrigate the farmer's lands with water from ditches and open waters in the area. Mostly found in Fryslân.


A few months ago I heard about an exhibition about emigrating. Being a wannabe emigrant myself (to Alberta, Canada if they please), I wanted to see this exhibition. But I forgot about it due to work and other stuff, until the Eagles were in town a few weeks ago. I had to drive Joe Public from the parking lot to the venue and I passed the museum several times, seeing the sign! 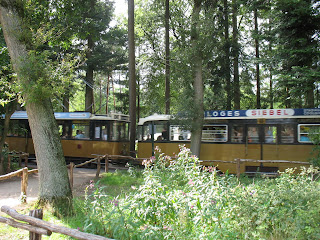 One of several old trams still in use in the park.


So, yesterday my parents and I were due to go to the museum. I had set my alarm clock at 7am, but I made a mistake and woke up late. I then had to run and missed my bus!

A plaggenhut (in Dutch) was made by creating a hole in the ground, creating a roof like area and covering them with grass/heather sods. It could house up to ten people and a goat or two. It was hard to heat or insulate, it crawled with creepies and the inhabitants had a short life expectancy. If you could build it between sun-down and sun-up and the chimney was smoking it could stay.


I made it in the end though and halfway along my parents picked me up and we drove to Arnhem where the museum is located. The first thing we did was see a small exhibition about what people took with them when they emigrated to Canada. Anything from new pots and pans to needle and thread, because (oh horror) they didn't 'have' that in Canada...

A TBC-hut. Used to treat ill people. It could turn to take in the full effect of the sun.


After lunch we took one of the old trams and got off at the first stop again. There we started our walk through the park and the visits to several old houses, farms and other assorted buildings. We saw some beautiful old places and the way people lived in them for centuries. Old trades were shown and occasionally you could talk to someone who knew a lot about that particular house/trade/era.


When we had walked around for a few hours, we need refreshments and we had a few 'poffertjes'. Imagine tiny pancakes, about an inch in diameter, served with sugar and butter. Mmmm, it's a true treat! After our treat we saw more old buildings, rich people's mansions, mills and a barack used to house Indonesian people after Indonesia became independent in 1949. By the time we had seen most of the park, it was closing time and we headed back home. We enjoyed a lovely Chinese dinner and then my parents took me back to the bus. 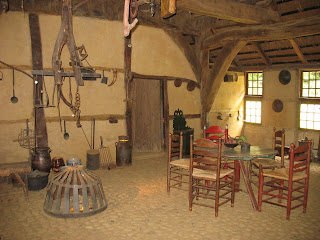 A so-called Los Hoes from Drenthe. Those farms were basically everything in one: living quarters for the farmers and the animals at the same time.