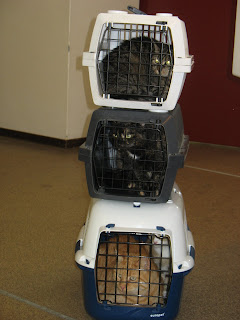 From top to bottom: Sophie, Mathilda, Wuppie and in the corner (barely visible) Linette


Yesterday it was time for the yearly visit to the vet. Always a massive operation in this household, since I've got four cats, three baskets and my only two ways of transport are my bike and my feet. Now, usually I would take my bike, put the trailer behind it and cycle off to the vet's. However, when they changed my wheel a while ago, they put the coupling on wrong, so I can't use the trailer anymore. Very annoying. Fortunately I have a very nice father who does own a car and he was willing to come and help me out!


So, yesterday as my father was pulling up weeds in the front yard, I made my way to the vet with several unhappy monsters. And they made it very known they were unhappy! After arriving at the vet's, I had to wait for half an hour. When it was finally my turn the vet told me she had expected four kittens! Well, if you want to call a 6 kg (13 lb) ginger monster a kitten... 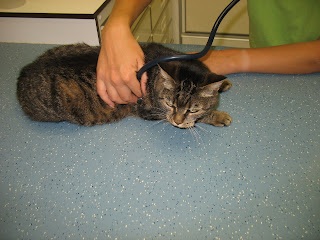 
First up was Sophie. She is always most scared, so I try to get her over and done with asap. She had lost some weight since the operation a few months ago, but she was doing fine. After her shots she moved back in to her basket as quick as she could. 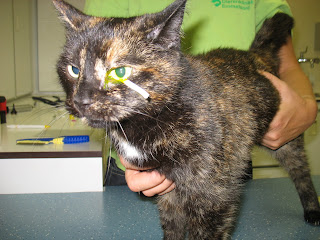 
Next up was Mathilda. She had some problems with her left eye, so after the vet stuck a piece of paper in her eye, making it look as if the Hulk personally was treating her, the vet found it was only a small infection and with some ointment she should get better reasonably quick. Then Linette was up. Her weight was good, teeth as well and she is generally a very lovely cat, so no problem there.


Wuppie was last in line. Both he and Mathilda love to just roam around the room, sniffing and looking. This time however, he wasn't so much into that. He was a bit grumpy, because he kept hissing as well. He didn't even want to come out of the basket. However once out, he didn't cause any problems. Probably because he is the most laid-back of all my monsters. Nothing fazes him.


After receiving the ointment for Mathilda, the anti-worm medication for all four and paying up, I was able to go home again.