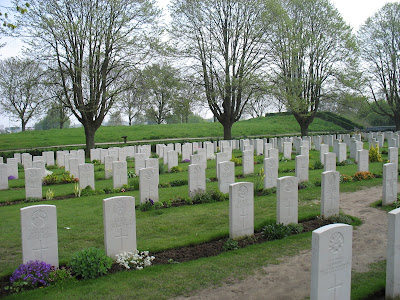 
This is one of the many cemeteries surrounding Ypres in Belgium. One hundred and thirty seven British ones alone! With over 40,000 graves still holding unknown soldiers!


During the First World War (or the Great War, the War to end all Wars), heavy fighting took place in both Belgium and France. The German forces on one side and the Allied forces on the other. One day the Germans would conquer five meters at heavy losses on both sides, the next day the Allied forces would reconquer those same five meters at again heavy losses on both sides. Shell shock was unheard of: it was thought of as defection and you could get shot for it (as indeed many were). It was the first war where poisonous gas was used and many were afflicted by it.


The reason of WW I was quite simple: a Serbian nationalist shot Archduke Franz Ferdinand of Austria/Hungary. The Austrians wanted an apology and several other retributions. The Serbians refused and the Austrians declared war. The Russians sided with the Serbs, not wanting to loose their influence in the Balkan. The Germans then sided with the Austrians. The French sided with the Russians and before you knew it, most of Europe was at war with each other. The Netherlands and Belgium were neutral and although the Netherlands were able to stay neutral, Belgium wasn't so lucky, drawing Great Britain into the war (and later the USA).


The end result of the War to end all Wars was approximately 10 million military dead, 20 million military wounded, 8 million military missing. The civilian populations were also hit terribly. In the region surrounding Ypres (and many more towns and villages in the area and even further afield), not a house was left standing. The area was razed to the ground and looked nothing like it had before. It would take years of rebuilding homes and lives. Germany had been shut off from food supplies during the war and many people starved. Huge percentages of men were dead or permanently disabled in all participating countries. When the Spanish Flu hit a year later, the result was devastating. Other diseases followed with the same result.


Apart from the people, countries changed as well. The four huge empires were gone: Germany, Russia, The Ottoman Empire and Austria/Hungary. Most of the participating countries in Europe had borders changed. New frontiers were going up and again the ordinary people were the victim.


Ypres is now known the world over as the center of the war. A large museum stands in the market place showing the atrocities of that war. But the largest atrocity is still the huge amount of cemeteries, where young man from all over Europe found their last resting place, the known and the unknown side by side...


For more Y stories, please check out ABC Wednesday and join in the fun!
Written by Mara at 00:02