Are we nearly there yet??? 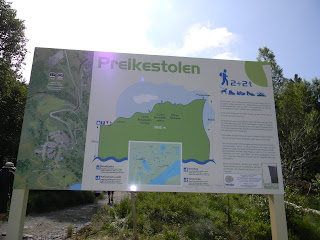 I was picked up at 6am, we picked up another friend and then we took a scenic route towards our destiny. The mist was clearing, we hardly had to wait for either of the ferries (the thing about fjords: you have to cross them at some point), we had beautiful views and just after 11am we arrived at the parking lot. From where it would be a little under 4 kilometers (just over 2,5 miles) to the top. Albeit with an incline of 334 meters (about 1100 feet) from 270 meters to 604 meters above sealevel. Didn't sound too bad and the two hours given for the trip up sounded okay. Little did I know...

We started and pretty soon it became obvious to me that those two hours were very optimistic. Unless you were young or well trained or a child. For me being none of those it was a bit more of a struggle. Which showed itself, when I lost my footing at some point and fell backwards in a little pool of water. My legs were sticking up, my bum was securely lodged in said pool. It was quite funny though, even if I did need the help of two sturdy and cute looking guys to yank me to my feet again!

Now, the problem wasn't so much the elevation but the path itself. First of all: it was thronging with people trying to either get up or down! Second of all, where I had expected a proper path, the path that was there, was basically lots of boulders strewn about. Climbing up and over, sometimes wet stones. However, apart from that one fall (and one near), I managed to clamber my way up the mountain to the top. Where the view was worth it. So beautiful, so blue! I had expected a flat surface, but even at the top, it wasn't. Nor was it quiet, since there were lots of people enjoying the view and the fact that yes, they had made it. Children and dogs included! It had taken us over three hours!

People had picknicks, even barbecued, hung over the edge, sat in the mountain or had a little doze on the edge of the cliff (ie me). We enjoyed sitting there in the burning sun, then had our photos taken on the edge and decided it might be time to actually try and get back down. The two hours given to get back down were a bit more reasonable in my eyes, but still, we had to do it first. The fact that it was mostly downhill, didn't mean that much, since the boulders would be the same: big and occasionally wet and slippery. Besides we were getting tired already.

Fortunately it was already half past three by then and there were more people going down than up. We still had to be careful though, which I noticed at some point where I took one route down, slipped, lost my footing and went crashing to the ground. This time forwards. I hit my head slightly, grazed my left arm and my right wrist. It gave us all quite a scare, especially me. I was treading extremely carefully (read slowly) from then on. Knowing that if I would fall again, I would have no chance of escaping with only bruises. So, it took us just under three hours to get down.

By the time we made it back home, it was nearly midnight. It had been a great day with beautiful weather, even more beautiful views, a great walk (despite...) and fantastic company. So, Preikestolen can be crossed off my list. Been there, done that, NEVER AGAIN!!!