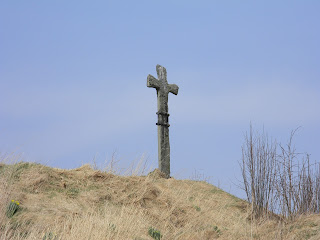 More photos of my walk from last Sunday. This time of a cross. I must admit that when I saw this cross I was at a loss. Why was it there and what purpose did it serve? It stands on top of a small hill overlooking the sea. There is a camp site below it and on the other side the main monument of Haugesund. Fortunately I found the answer only a bit further on, so this is the transcription from that.

The stone cross at Krosshaug is believed to have been erected in early Christian times. Early stone crosses of this kind indicated that the country was Christian, and they were erected to both 'christianise' heathen graves and indicate Christian gathering places before churches were built. They may also have been erected as monumental stones. This cross stands directly on the rock, with no burial mound underneath. Bishop Fridtjov Birkelid, who studied the Norwegian stone crosses closely, suggest that a monument may have been erected to King Harold the Fairheaded's eldest son, King Eric Bloodaxe, who died in England in the year AD 945.

The cross is almost 3 meters tall. It broke in half in the winter of 1846-1847 and was reconstructed in 1869 with the two parts joined by iron rings. Rogaland and Sunnhordland are the regions outside Great Britain with the largest number of stone crosses from early Christian times.

PS: I just noticed the engraving has a mistake in it: The cross was fixed with irong rings in 1869, so the cross in the engraving should have those on, since it also shows Haraldshaugen which dates from 1872!
Written by Mara at 07:00