Tuesday morning, quarter to nine in the morning and my phone rings. My boss, asking me whether he can change the planning for today? And if so, please take some spare clothes and a sponge bag with me! So last night, in stead of coming home, I stayed in a hotel. I came home tonight, but will be off to work early again tomorrow morning and not return until Friday night. Ah well, another hotel, who's keeping count?


Today still proved to be the least bit of work this week though, despite a different location. In the morning I had to drive to the trainstation, pick up some people and drive them to the airforce base. In the afternoon I had to take them back. I wasn't alone though: seven other drivers were there as well. Doing nothing! Fun fun fun... 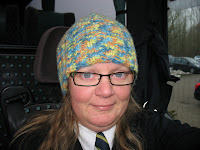 I've had quite a few comments about my hat, either the old one or the new. Now, I believe them to be jealous, because they make do with boring black or navy hats and I have this spiffy brightly coloured one. But there were some questions out in blogland concerning my hat, so here goes: I left my old hat in Germany when I built a snowman last week. It was a bit big and not a very good hat, since it was really loose. In other words, my head was still getting cold. So, I knitted myself a new one! And I used the wrong needles (four sizes too small for you knitters out there: hard on the hands) and for once managed to knit quite tightly. I have a lovely new hat now, which is warm as well. And apparently the cause of much merriment.
Written by Mara at 22:07