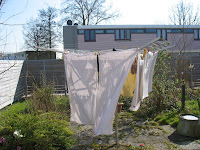 My spirits are lifting. Slowly but surely they're coming up out of the blue depths they've been wallowing in and arriving in the sunshine. Helped by a day off, a good book ("First among sequels" by Jasper Fforde), sunshine and rising temperatures. So, out we all went, annoying the neighbour's cats, hanging up the laundry and trying to get a photograph of those little metallic beetles in the end of the branch (nope). 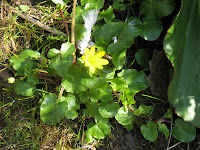 While out in the garden I discovered a plant I hadn't seen before. Well, only in other people's gardens, never in mine. Ground crawlers and only found in the spring, they are considered by some gardeners to be quite a pest. However, since my garden is an eclectic mix of 'never doing much' and trees that came blowing in, a butterfly bush, a berry bush and my christmas tree of two years ago, I probably wouldn't be the authority to ask. I did take a photo however. I think it's of the speedwell family. I like the flowers, they are cheerful and in the absence of any other flowers in my garden, they herald spring to me.
Written by Mara at 16:54