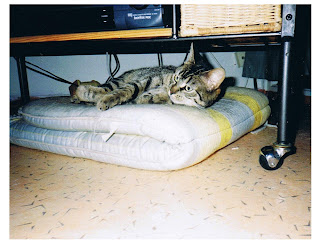 Well, I had the phonecall from the vet's clinic. They had the results back and I was allowed to have a small hurray. Not a hallelujah, but a hurray.


Even though the vet would have liked about 2-3 centimeters of clean tissue to be taken as well as the tumor, in the end they were only able to take 2-3 millimeters. So, not the best starting point really. But the operating vet thought it all looked clean, so that was a start. The results today showed that of all the 'clean' tissue they checked, not one was infected. That doesn't mean it hasn't spread, but the likelihood of that is several times smaller now.


Now, the cancer she has/had is treated best with an aspirin-based drug. Which she will have to have for the rest of her life. And with my job that is not the easiest thing. After all, my job consists of week-long trips abroad and while I'm away, my neighbour looks after my monsters: feeding them and putting out fresh water. However, she only ever sees three cats, because Sophie is a nervous kitty and doesn't like strangers. But the vet wasn't too worried about that: 'better give it to her whenever I can. It's always better than none at all.'


So, not quite halleluja, but hurray is okay!
Written by Mara at 20:48