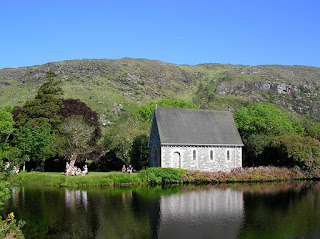 
Ireland again, but I couldn't just leave this one out, since it's one of my favourite places in the whole of Ireland! It's a monastery founded by Saint Finbar in the sixth century on an island in this small lake. The sky is the ceiling and the mountains are the walls. I always find the place very tranquil and peaceful and I would love to go and stay in the hotel on the edge of the little lake. There's also a national park adjacent, offering walking trails and beautiful scenery.


The lake is the beginning of the River Lee. After he founded the monastery at Gougane Barra, Finbar went down the river until he reached an island in the middle of the river. It was quite swampy, but he decided it was a nice place and founded another church. The Irish word for swamp is corcaigh, which in its English version became Cork.


Gougane Barra is in County Cork, in the so-called Gaeltacht. That means that the predominant language in the area is Gaelic (or Irish), instead of English. The amount of people speaking Gaelic as their first language is rapidly decreasing and the areas where the predominant language is Gaelic is shrinking as a result. However, during the last few years, the language has become more popular again, thanks to a few things: 1. TG4 is a television channel broadcasting mainly in Gaelic and 2. young people have realised that whenever they speak Gaelic, not many people can understand them, especially foreign English speakers.


For more G entries please check out: ABC Wednesday
Written by Mara at 22:54