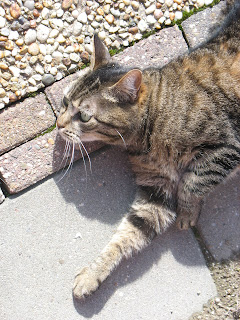 Picture taken Wednesday 11th March
Just having fun outside
Well, there was never any other option than post about Sophie today. I took her to the vet's clinic this morning and left her in the hands of the vet who was going to operate on her. At around one o'clock I got a phonecall saying she was in the recovery room, trying to wake up again and I was able to pick her up at around five o'clock this afternoon. Still very drowsy and very dozy, but she is alright.

Sophie in her travelling case on the way to the vet


The vet told me she had to take two-thirds of her bladder out. She couldn't take any more out and had only millimeters left to work with. Any more and she was cutting into the urinary tract and that would be fatal. The tumor has now been sent to the lab and only after they have tested it, will they know whether the operation has been a success or not. If it has then there's no problem. If it hasn't (because she didn't take out enough for example), then there's not much more they can do. I hope for the first of course!

In her basket after returning from the vet, still drowsy and wobbly
Written by Mara at 18:02