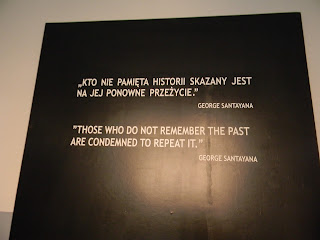 
Do you remember Anne? I wrote about her a few days ago, when we went to visit the first camp she was sent to after they were discovered in the 'Achterhuis' in Amsterdam. As I said, she and her family and her other housemates left on the very last train to leave Westerbork and were sent to Auschwitz.

There were three areas in Auschwitz. The original part or Auschwitz I, where mainly Polish nationals and Russian prisoners of war were held, but also Jewish prisoners. They were basically forced to work and starve, since especially the Russians and Jews were viewed as sub species. But it was in this camp the first working gas chamber of the area was made, using Zyklon B.

Auschwitz II (Birkenau) was the main Jewish camp, which became known the world over as the extermination camp. Several large gas chambers and crematoriums built especially to eradicate the Jews of the world. And then there was Auschwitz III (Monowitz) which was built especially to house workers for the IG Farben factory, since the main camp was too far from the site. Plus there were about 45 bigger and smaller subsidiary camps in the area, most catering for the industry.

When Anne and her family left Westerbork on September 3rd in 1944 they were put into cattle cars and together with about 1,000 other prisoners they travelled for 2 days before arriving at Auschwitz II (Birkenau). As soon as they got off the train they were forced to make two lines: men and older boys on one side and women and children on the other side. Anne could probably not even say goodbye to her father, before he was forced to stand on the left, while Anne and her sister Margot and her mother were forced to the right.

Most of the prisoners who arrived were killed within 1 hour of arrival, but Anne and her sister and parents were 'lucky', they were deemed fit enough by the doctor to work and they were sent to the camp instead of to the gas chambers. Father to Auschwitz I and the women stayed where they were.

It must have been strange for Anne to enter the barack where she would spend her time. Instead of a bed, there were bunks, the lower ones being on open ground. Sharing with a lot of other women and girls, sometimes so many that if one person turned, all the others had to turn as well.

There were lice and fleas, other creepies and rats as big as cats, that fed themselves on the dead and even on the living at some point, because they were too weak to fight them off. After a short while Anne developed scabies and was put in the scabies ward, which was separated from the camp by a high wall. Margot went with her. That was probably the last time they saw their mother, because only 6-7 weeks later a train left for Bergen-Belsen and it is very likely Anne and Margot were on it. Their mother died in Auschwitz II in January 1945.

Seeing the site for ourselves was incredible. Seeing the documentaries and films doesn't prepare you for the sheer scale of Auschwitz II (Birkenau). Most of what is standing right now are chimney stacks, but even then it is mind blowing and scary. Eighty percent of people arriving were killed within an hour of arrival and never stood a chance.

Mothers and children, old people, the handicapped and everybody the 'doctor' thought was not fit enough for work. And even if they did survive that first hour, sleeping on the cold ground, living on meagre rations, being worked to death, being forced to stand in the cold for hour upon hour killed many more.

As with Westerbork I didn't want to be in any photo and felt sorry especially for all those children who never got the chance to cuddle a teddy, to go to school, to swim in the river and to enjoy their childhood the way they should.