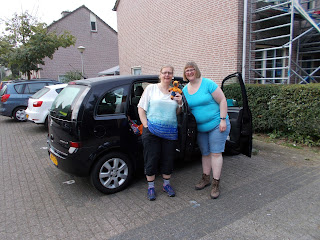 
Today was our first day of the road trip and boy, have I seen a lot of road! In fact we saw about 10 kilometers of it for an hour and a half! When there was only an hour left to go to the hotel, so not good!

But, it started off good. Well, serious anyway, because it wasn't good. You may have heard of a girl called Anne Frank. She was a little German girl who came to live in the Netherlands in 1933 when her family started having difficulties in Frankfurt in Germany because they were Jewish. She was happy and healthy and enjoyed school and friends. And then Hitler invaded the Netherlands and all Jewish people were banned from a lot of things. She couldn't go to the swimming pool anymore or to the cinema. She had to go to a Jewish school and she had to wear the Star of David with the letter J in it to make sure everybody knew she was Jewish.

And then in 1942 all the Jews were told to report themselves to the police so they could be transported and live together in special work camps. Anne's father didn't believe that and made sure he, his wife, his elder daughter Margot and of course Anne were hidden behind the closet at work. Others soon joined them. By that time Anne had gotten a diary and wrote very often in it about her life and her dreams and all that is normal to think about when you are a teenager.

And then somebody ratted them out. They were all picked up, taken to the police station in Amsterdam and after a few short days they were put on a train to Westerbork, in the east of the Netherlands. There were a lot of other Jewish people there, as well as a few Sinti/Roma (gypsies). The camp had been built in 1939 to deal with all the fleeing Jewish refugees from Germany, while they were waiting for visas to the United States or other countries. The Germans took over in 1942 and the refugees became inmates.

Most of the people in the camp didn't stay long. From July 1942 a total of 93 transports to Auschwitz, Sobibor, Mauthausen, Bergen-Belsen and Terezin (Theresienstadt) left Camp Westerbork. Over 100,000 mothers and fathers, sons and daughter, aunties and uncles, friends and neighbours were sent East. Around 5,000 survived, but most were killed on arrival at their destination.

When Anne and her family arrived at Westerbork, they were put in the penitentiary part of the camp, reserved for those who had tried to hide. They were always quick to send those off and Anne's family was no different. They left on the very last train to leave Westerbork in September 1944 and sent to Auschwitz.

As a teddy it is very hard to understand why people aren't nicer to each other. I am orange and I know of brown and white and pink and yellow and purple teddies and everybody loves those. Some of us have bows and ribbons, others make noise, but we are all loved. So, to be singled out because you have a different faith or colour or purple feet is not good.

Even though there wasn't much left of the camp, it was a depressing place. And I didn't want to be in any photos either, knowing that most of the people had everything taken from them, including teddies and dolls.

We will be visiting two more camps during our road trip. But fortunately we will also be seeing a lot of other stuff as well. Because tomorrow we will be leaving Germany (where we are right now) and head into the Czech Republic!
Written by Mara at 22:27