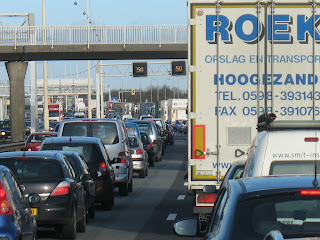 
No, not nice strawberry version, the no end to the line of cars version!


As a driver I get my fair share of traffic jams. Fortunately I live in a fairly quiet area of the country without too many of them, but occasionally I get stuck. Sometimes only for five minutes, other times for hours on end.


I once got stuck in three jams in one day. At the end of that day I wondered why I had chosen to become a professional driver! I was tired, I was fed-up and I was sick of all the not-driving I had done that day! But that only lasted until the next morning!


In the Netherlands most traffic jams during rush hour are between two and ten kilometers. I've heard of jams in France and Germany, especially during the start of the holidays, that are over forty kilometers! The horror...


The first official traffic jam in the Netherlands took place on May 29th, 1955 (Whitsunday). Masses of people decided to take advantage of the lovely weather and take their car somewhere. The traffic jam was a novelty and according to some people a sign of 'civilisation'. Well, did we learn fast!!!


For more J-words, please check out ABC Wednesday and join in the fun!
Written by Mara at 00:02