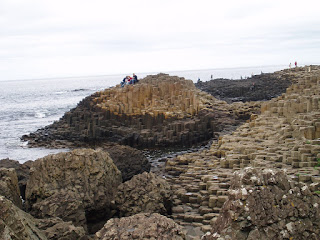 
Found in the north of Northern Ireland, this is an area of about 40,000 interlocking basalt columns. In 1986 it became a World Heritage Site. It's a beautiful spot, although I found it quite spoilt by all the tourists clambering all over (I have to admit, I was one of them). Besides that, the name suggests a huge or gigantic area and that is just not true, it is actually quite small.


The giant Finn McCool and his Scottish counterpart Benandonner were always at odds with each other. One day, Benandonner came over to Ireland to fight Finn. Finn got a bit scared and hid in a pram. When Benandonner arrived, he found the pram and Finn, but thought Finn was only the baby! Now he in turn got scared and ran off. Finn then followed him over the causeway with a clump of land he had taken and threw it after him. The clump of land came from what is now the largest lake in Northern Ireland. Where it landed is now the Isle of Man (not much for direction, but hey, it's a legend). While Benandonner fleed, he ripped up the causeway.


Of course the story above is a legend and there are several variations to the story. Truth is though, that if they were to drain the water between Ireland and Scotland, you could walk all the way on the basalt columns!


For more G-words, please visit ABC Wednesday and join in the fun!
Written by Mara at 00:02