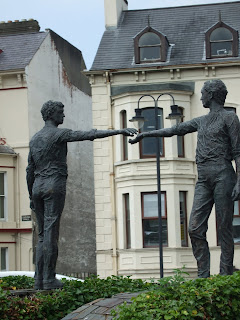 Hands across the Divide


This statue can be found in Londonderry or Derry in Northern Ireland. Me and my sister were there last year and found the town to be lovely. Not at all like it must have been when the Troubles were at their height (Bloody Sunday took place in this town).


There was however still quite a strong protestant/catholic thing going on. The catholic neighbourhood was quite a densely packed area, whereas the protestant neighbourhood was a lot more open. There were also red white and blue curbstones and lampposts.


This statue represents the two peoples: Catholic (Irish) on one side and Protestant (English/British) on the other side. The hands are not touching, but if in future the situation becomes better and they are finally able to bury the hatchett and deal with each other as human beings instead of "them" and "us", there is the possibility to move the two figures closer together and have them touch hands.


For now however, this is the best they can do it seems.


For more H-words, please visit ABC Wednesday and join in the fun!
Written by Mara at 00:02