Walk on the island in the land

Part of trying to lose some weight and getting fitter, is going for walks. I have set a goal of 4 exercise moments during the week and they can be the simple walk to the shop and back variety, cycling around the neighbourhood or actually going a bit further afield.

This past week I didn't make the four. In fact, I think I only got as far as two. I started well on Sunday with a lovely walk through the neighbourhood, but then my knee hurt quite badly and it kept me grounded for a couple of days.

But, once the knee was feeling better, I tried my hand (or should I say foot) on a bigger walk. Mind you, it hadn't meant to be that long, but detours and such kept me walking for longer than planned.

First of all, I had to drive for about half an hour to get to where I wanted to walk and then I was going to walk from the car park at the museum to the old harbour and back. Which I did. It's just that instead of taking the same route back (no fun in that), I took the longer circular route back. Basically continuing on the path. 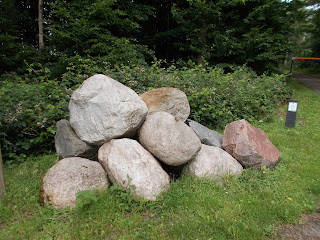 I saw butterflies, baby toads, wasps (see yesterday) and rocks. The latter two because I made another little detour. As you would when you're in the area anyway. My knee held up beautifully, so no problems there. My feet were another matter, as I could feel the blisters forming, but the knee was great.

Until I had come back to the car and took off the small brace I wore. I sat in the car and basically it wasn't nice. That evening I could barely get up the stairs, because of the pain. It took several days to be subside again and even then it wasn't great walking the several hundred meters to the shops. 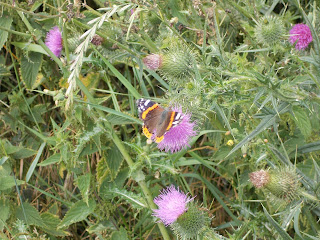 I will make an appointment to see my gp this week, as I don't feel this is right. Walking and cycling have so many benefits. I know I don't lose weight with the few kilometers I do, but it takes me outside in the fresh air, it helps with digestion, it gives me a tan (as well as nasty bug bites). Let's hope it's nothing too serious.
Written by Mara at 08:30

Labels: Health, Out and About