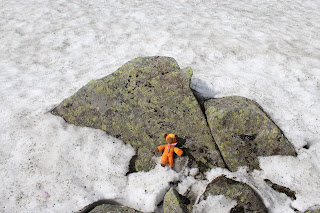 
Did you miss me? Did you wonder where I was yesterday? If you did, it might be wise to remember I am on holiday with the Two Dutch Dopes! The ones that took the wrong train just because it was standing at the platform. The ones that forgot money, driver's licence, tickets to the Edinburgh Tattoo. Just to give you an impression of their dopiness.

Okay then, yesterday. Do you remember the plan? If not, here it is: first we would put everything in the loft that Mara wanted to keep. Then we would take everything that Mara didn't want to keep to the Salvation Army (around 10 am). And they did that. Noooo problem. They had talked about driving to see some waterfalls that might be nice to see, so after having dropped the stuff off, that's what they did.

The first waterfall they saw was a bit... ehm... small. Turns out it wasn't the right one, because only a few minutes later there was a nice big one. So, we parked the car again and took photos. We finished our lunch (bought at the small waterfall place) and continued to the next one. Which was a bit more spectacular, although I did wish Mara had brought my rain hat. Not because of any rain, but because of the spray of the water.

While driving from one waterfall to the next, the plan became: drive on to the little town following the waterfall (called Odda), get out there, walk around a bit, get back in the car and drive home. Possibly with some dinner at the small waterfall place (Åkrafjordtunet). And then they saw a sign with a large map on it. Well...

We stopped in Eidfjord, because they saw some wool on trees. I mean, really? That's worthy of a stop? But, I had to grant them that: it was. After that, we got some supplies: water and bamsemums (marshmallows with chocolate) and on we went. Towards the Hardangervidda (Hardanger Plains).

Well, what can I say other than: it was soooooo worth it! It was beautiful! It was stunning! Every turn we took, there was a new view that took our breath away. Want to see snow capped mountains? What about snow covered ground and ice covered lakes? It was just... WOW!

After all that we drove down to the town of Geilo and they wondered. Because the plan had been to see the waterfalls and return home, the subject of supplies had not come up. Nor had the subject of GPS or road map, since it was an easy way to the waterfalls. It was by then around 5.45 pm and we were a long way from home.

Mara asked at a local petrol station about the shortest way home: basically the same way we had come. The big question however was: would we? Or would we get some basic night supplies and get a hotel? Well, in the end they had themselves a pizza each and drove home! And we didn't get home until 11.15 pm!

It was a long day and Mara (who had done all the driving) and Gera were tired when they got home. But boy oh boy, it had been a beautiful day, despite the rain on our return. That's what happens when you are having a holiday with the Two Dutch Dopes!

Labels: Brom, Norway, Out and About