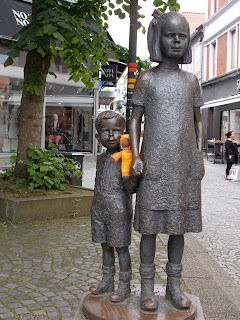 
It's me! With more stories of our lovely holiday here in the good ol' United Sta Norway. And today we took a bus and then a ferry and then back on the bus and then we had arrived. Because we went to Stavanger. A lovely town/city about 90 minutes away. 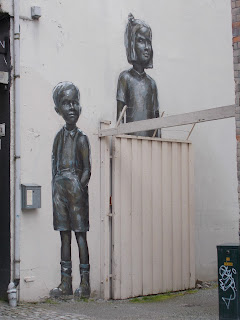 And it proved to be a lovely place indeed. Lots of up-and-down and right-and-left streets and alleys. So, the first thing Mara and Gera did? They hit the shops!!! What? I thought we were going to be cultural and visit museums and churches and such. Instead we went into a shop. I must admit, I do despair of those girls some times. 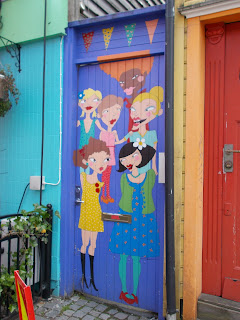 But in between all those shops, Mara had her camera out, because she saw things everywhere! A little statue of Johanna and her little brother and then, not 5 meters away, a wall painting of the very same. We saw beavers and a turtle, sheep and a billy goat. 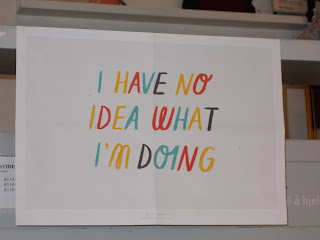 And there was a lot of fun art on the walls. Plus some boards with funny texts. So, we did get cultural as well. Although not as much as I had feared (I will have to be honest here, I am not so much into museums and churches and such, I prefer to be outdoors. I am after all a bear!). 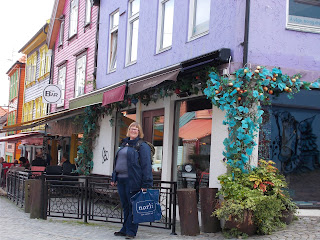 The plan had been to stay well into the evening, but in the end we left at 2.15pm and we were all perfectly happy with it. Mara's haul? An 80's cd with 80 tracks (still no Madonna) and a cd with music from the 50's and 60's. A little money bank in the shape of a pineapple. Six storytelling dice. Two Christmas tree ornaments. And books. Of course! 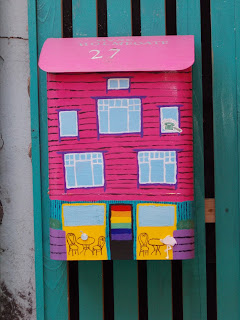 Gera was a bit easier on the buying front, but she bought a lovely train game (Ticket to Ride). She loves to play those board games like Catan and this train game, so when she found the Scandinavian version, she had to have it. A Christmas mug and plate and last but not least a little tin troll. We are after all in Norway! 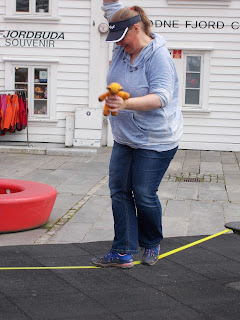 We had a lovely dry day with a bit of shopping and a bit of culture. Oh, and a bit of tightrope walking as well...
Written by Mara at 18:30

Labels: Brom, Holiday, Out and About