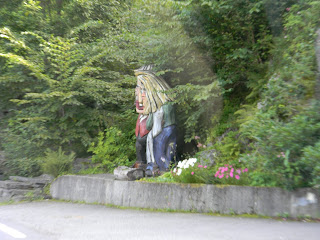 The original plan had been quite simple: start hiking at 8am, be down around 4pm-ish and then drive home. Be back home well before midnight. That plan had a few flaws. Firstly, we couldn't get breakfast until 8am, which meant we left about 45 minutes late. Secondly, there was this awful descent that took three times longer than an ordinary descent would have been. And thirdly, they took me along!

By the time the coach was moving, it was 7.45pm. Almost four hours late! But the distance hadn't shrunk, that was still a six/seven hour drive! And we had to get some food into us as well. So, in the end it was half past three in the morning when the coach rolled onto the lot! I had tried to sleep on the coach, since I had made a fatal booboo: I had forgotten to change my shift and had to work an early shift! I finally hit my pillow at a quarter past four in the morning. Only to be rudely awoken again an hour later!! 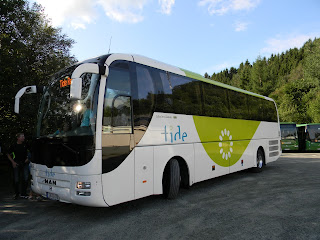 I was late for work by only a few minutes. But I made it through the day. Some how. Because as the day wore on, I started feeling worse and worse. The backs of my calves were burning, as were the fronts of my thighs. I couldn't lift my arms higher than my shoulders and my back was hurting in places I didn't even know I had (the places I mean). By the time I went home, I walked like an arthritic 120-year old! Getting down steps was agony, as was getting down slopes.

I got home and on the couch. Laid down to watch some Doctor Who and eat some white chocolate (she must be psychic). When it was time to go to bed though, ooh. It took me the longest time to get into a sitting position, let alone off the couch. And don't even talk about getting up to bed! 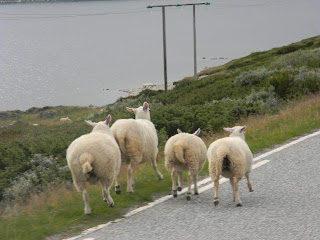 In the middle of the night I woke up because I couldn't even turn around in bed anymore! By the time I had managed it I was so awake I had to go to the toilet, which meant a further twenty minutes! Tuesday was therefore even worse than Monday had been. On Wednesday I started feeling better again though. On the mend so to say. 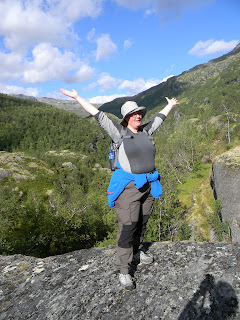 The question now is of course: would I say yes again, after all, this is my Yes-year! Welllll.... With some adjustments, I might! First of all, I need a bit more (read a lot more) training. I am so out of shape, getting up a 25 meter incline is taking my breath away. Secondly: loosing a bit more weight would be good too, but I guess that once I get more training, I will loose weight. Thirdly: I need better gear. I have good shoes, but they are Dutch path shoes, not Norwegian stony mountain path shoes. I have a lovely bag, but it's way too small. I need good clothes, although the clothes I wore on Sunday were good. And fourthly: I need to take better care of my feet, regarding blisters and the like! So, perhaps my next tour will be...