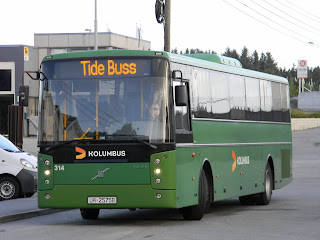 Cabotage is the transport of goods or passengers between two points in the same country by a vessel or an aircraft registered in another country. Originally a shipping term, cabotage now also covers aviation, railways, and road transport. 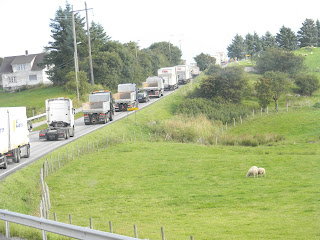 I live in Norway, work for a Norwegian company, earn Norwegian wages, pay Norwegian taxes. But there a lot of companies in Norway that are not Norwegian. They may be Spanish coach companies, Estonian or Lithuanian lorry companies. They charge a lot less, don't pay their drivers much, don't pay taxes, don't pay tolls and quite often have bad equipment (like summer tires in winter time). 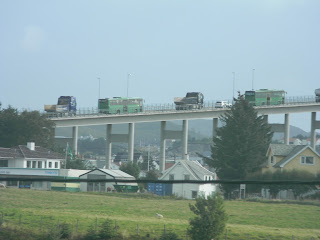 Today there was a protest against this cabotage. Because jobs are getting lost and companies are going out of business, because they can't compete with the foreign companies. Three places around Haugesund saw buses, coaches and lorries collecting to then drive in convoy to a Haugesund industrial estate. After everybody would have arrived, there would be speakers from the union, national lorry organisation and several political parties (there is a general election coming up in September). 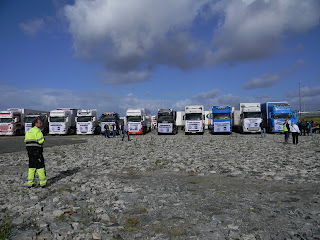 I was in the group coming in from the South and we were the smallest group. The other two groups came from the North and East respectively and were much larger. It was great to see them arrive though (we were first). A lot of people worried for their jobs and livelihood! 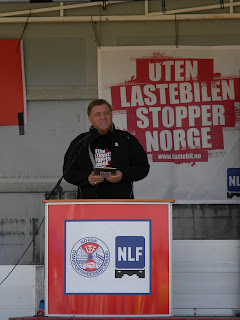 We hope something will change. That rules will be stricter, that foreign companies will be forced to shorten their stays which in turn makes it unviable for them to work here. That there will be more controls both at the borders as inland.

Well, that was my Saturday. A little different from last weekend, but no less interesting!
Written by Mara at 23:52