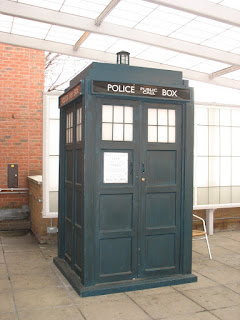 
When I was young, I didn't like Doctor Who. I was always a bit scared by the opening tunes to the show and didn't really get it. Besides, I preferred playing outside with my friends than sitting inside. But when I caught an episode of the show a few years ago, I was hooked.

Of course it looks a lot flashier now than it ever did in the past. Aliens look alien now and not like a man in a bad suit and bad make-up. It also helps that the ninth, tenth and eleventh doctor are quite easy on the eye as well. Anyway, the Doctor lives in a TARDIS, which is an acronym and stands for Time and Relative Dimensions in Space.

It looks like an ordinary blue police box (as used by British police in the 1960's), because its shape shifting qualities blew a fuse and got stuck. When you enter it though, it looks nothing like an ordinary blue police box. Because it is massive! From what I can gather there are at least two bedrooms (one for the doctor, one for his companion), a dressing area, the hub where the flying takes place and I think there's even a swimming pool!

Not only is it used on the show Doctor Who, but the term Tardis pops up in other shows as well, most notably the ones that concern themselves with buying houses. (It's bigger on the inside!)

For more T-words from around the world, please check out ABC Wednesday and join in the fun!