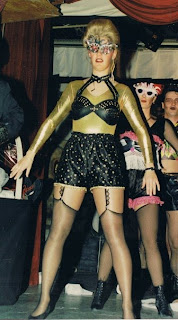 
When I worked for Club Med in Tignes, France, I was asked to be in several shows. Well, when you work for Club Med, being asked means that you have to do it. And I didn't really mind too much. One of the shows I was being asked for was the Rocky Horror Show and wasn't directed by the usual director/choreographer, but by one of the ski teachers.

For some reason (probably because he liked my bosom, at least he told me so), I was allowed to be at the front of the chorus and the choreographer was behind me. She was not well pleased, I can tell you!

The first time I saw the show on video, I thought it was awful, but since then I have grown to like it a lot and it is one of my favourite musicals. I would love to go to a proper showing some time and see it in real life as a spectator.

Let's do the time warp again...

For more R-words from around the world, please check out ABC Wednesday and join in the fun!