So, what did we do? Since I had to work the first three days, not much. Yesterday we were supposed to go to that climbing park I took my family to two weeks ago, but checking the weather forecast beforehand, we decided a bit of second hand shopping would be in order. So, we came away with new and mostly unnecessary stuff, like beads (she) and felt (me). Mind you, she felt she needed the beads and I felt I needed the felt.

This morning however the weather looked good and we were both raring to go. So a little after nine we made our way to the park in Nedstrand (about an hour's drive) to start our little climbing expedition. We got kitted out and we went through the training course again. As you may remember, last time it was very hard to make it onto the platform again. This time? It was as hard. But fortunately I had my friend with me and she just grabbed hold of my leg and started heaving me up! Time to start the proper course!!

We were doing the light green course first. It is the low family course, which means that everything is low: the wires to hold on to, the wires to crawl under to get from one end to the next. At times it was hard to find out how to do that, other times I just stayed on my knees! There were two ziplines and for both I needed help getting on the platform again.

It was high, it was scary at times, there was a lot of movement, but I did make it to the end! I was so pleased with myself. We then had a lovely picknick lunch we had taken from home. Get some strength back before our second course: the dark green one, or the high family one. 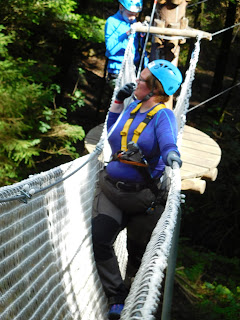 The second course was a bit easier to get through: the wires were higher, so I felt a bit safer. However, by then fatigue had begun to set in and I was getting a bit shakey. Unfortunately I would still have to do 4 parts before there was a chance to get down, but I made it through, albeit with quite jittery legs. I then got the camera off Pepperfly to take some photos of her in action, since most of the photos up til then had been of me (not complaining mind). She completed the whole course.

However, even if I didn't complete the whole second course, I still feel like I achieved something. I knew it was time to stop and trying to finish it would have been madness. I would most likely have frozen up at some point, which I didn't think would be wise at all. 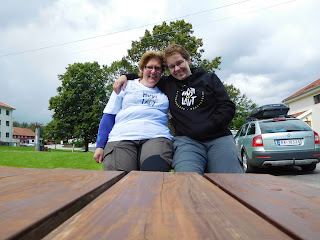 Labels: Friends, Out and About