Brom's adventures in Scotland I 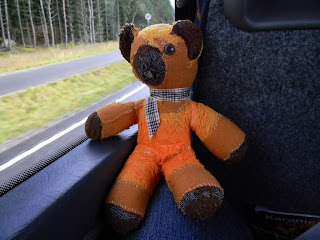 
Well, as you may have guessed, we are home again! Ooh, it was a beautiful holiday. I saw so much, but Mara said it might be easiest to do it day by day and tell you about Everything that happened. So, here goes...

On Saturday the 8th we were picked up by a friend of Mara's who would take us to the busstation. Because the first part of our trip we would do by bus! And then a boat and then the bus again and then another bus. And then a plane. Another bus, another plane and then a car. It's a good thing I never get travel sick!!

When we got to Amsterdam Mara had to hurry to get to another gate. I am just glad I was in her handbag, because it looked very very busy. But Mara got to the other gate in time and there we said hello to Mara's Papa and Mama and got on the second plane. 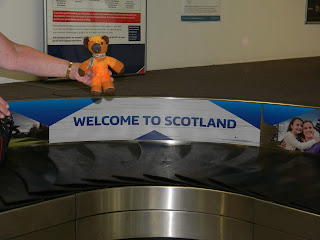 In Edinburgh it took aaaages to get the luggage. And then Mara's name was called: her suitcase hadn't arrived at all!! It was still in Amsterdam! How silly of the plane people! It wouldn't arrive until late in the evening and it would not be delivered to our home away from home until the next day.

As we got out of the airport we met Gera, who is Mara's sister. She was very clever and held up a sign so we could spot her. Together we went to get the car, which was huge!! There were all sorts of buttons and levers and things, but no thingy to put the seat forward. But they found it in the end and we could go to Inchyra where we would be staying. First though: a supermarket, because they all needed food. It's a good thing I am a bear and live on cuddles, they don't cost anything.

The house was lovely when we got there. Mara had said it was an upside down house and I was a bit nervous about that: I can't walk upside down! But, it only meant that the kitchen and living room were upstairs and the bedrooms were downstairs. Phew... 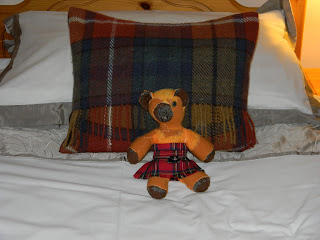 After a long day we were all ready for an early night.
Written by Mara at 08:00