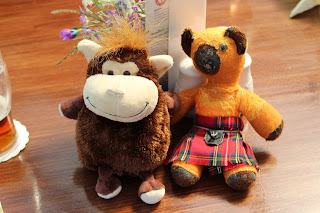 
This day was a special day. Not only did we go underground without going underground, but we got to meet Mr Chips [and Yamini, don't forget Yamini]! 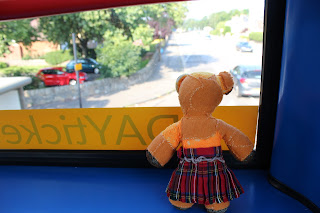 First we took the bus into town again. We sat on the topdeck and I got to sit all the way upfront! I could see all the buildings and saw everything wizzing by. We got off the bus in the center of town and today it wasn't so busy as yesterday. But it was still early.

Mara's Papa and Mama took the bus up the hill, while Mara and Gera walked up the steep hill. They looked at some of the entertainment setting up, got a coffee and waited until we could go on the tour.

The tour was through one of the old closes. A close is an old name for an alley and they were very narrow. There would be houses on both sides and they would be up to 10 stories high! And that was a long long time ago! We saw a cowshed and a kitchen, a living room and heard stories about how they lived that long ago. The lady even told us a ghost story, which was quite scary. I was glad Mara held me really close. Unfortunately Mara wasn't allowed to take any photos!

By the time we got out, it was a lot busier in town. We weren't staying though, we were going back to the hotel to pick up the car and meet Mr Chips [and Yamini, don't forget Yamini]. We made it to the restaurant and had a lovely table for our lunch. And the food was yummy Mara says. Mara's Papa had haggis and thought it was scrumptiously nice. Mara tasted it as well and liked it as well, although not scrumptiously she said. 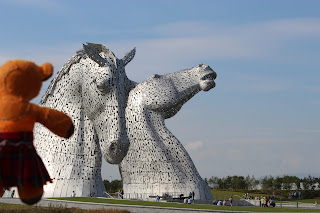 After our lunch we said goodbye to Mr Chips [and Yamini, don't forget Yamini] and drove to our next destination. We were going to see Baron and Duke, otherwise known as 'the Kelpies'. Mara had been there last year (on a holiday without me) with Yamini and wanted to show us. 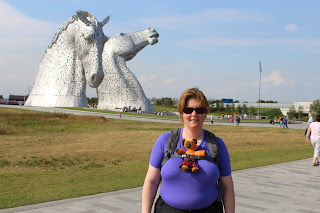 Now, when we were driving to the Kelpies we had seen a sign for the Falkirk Wheel. Mara knew what it was, but thought it was at the same place as the Kelpies. It wasn't too far though, so after all the photos were taken, we got back in the car and made our way to the Wheel.

Mara says that boats couldn't go up the hill because the hill was too steep, so they made a thing that would carry the boats up the hill. It was like a merry-go-round with only two gondolas. If you came from the top, you would sail in the gondola, the merry-go-round would start and slowly you would go down. 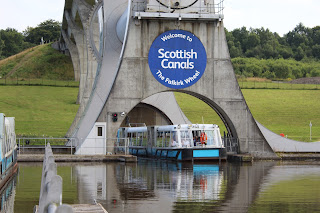 There the gondola would open, you would sail out and continue on the canal. I would have loved to go on a tour, but we were too late for the last tour. Perhaps next year??

Then it was back in the car and we drove home again. Another brilliant day!
Written by Mara at 08:00