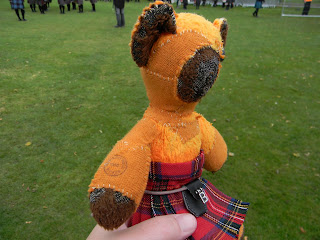 
On the second day of our holiday we were going to Perth. It was very close to where we were staying and we were going to visit the Highland Games. I was allowed to wear my kilt and my sporran all day and was really excited. After Mara had payed the fee to get in, we all got stamps on our hands to show we had payed!! 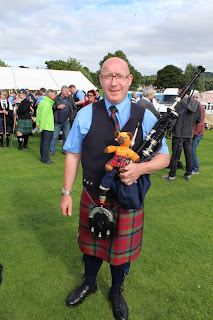 There was so much to see. First we went to see some of the piping bands. They came from Scotland, but there was also a band from Vienna in Austria, a band from Oman and one from Malaysia. And apart from those last two, they all wore kilts! Just like me. I fit right in... 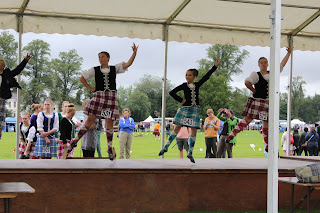 After that we walked around a bit and ended up at the dancing girls (and one boy). It was a competition and they all had to do the same dances. Some were really good and others not that good yet. But it was good fun to watch. And nearly at the end I even... 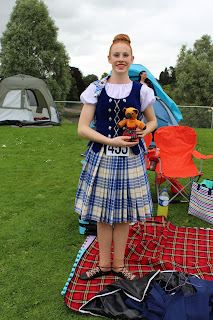 got a photo of me with one of the dancing girls. Doesn't she look pretty? And we even saw her dance as well. I think she was very good and I hope she will do very well in her dancing. And did you know: she came all the way from New Zealand!! 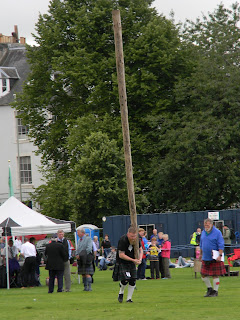 But there was so much more to see. We saw big big men throw a big pole. It was huuuuge! And they threw hammers with chains. I don't think I would have been able to lift it, let alone throw! 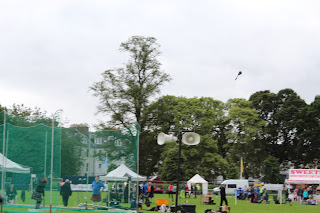 There were several cycle races, but they were quite confusing: they all started in different places and the first one over the line would have won. But we couldn't see who had started in the front. And the runners did several races like that as well. 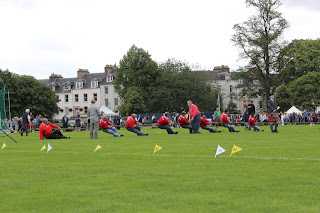 More strong men came into the big arena and they were doing a tug-of-war. It took ages, but in the end the reds won all their matches and were the champions. 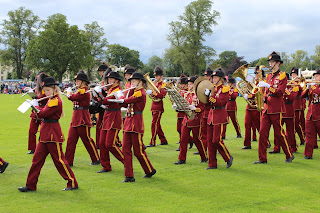 Nearly at the end of the day there was a big surprise for Mara: a school band from Oslo, which is the capital of Norway, came into the big arena and played. Heia Norge!!

And completely at the end, all the pipe bands (minus the one from Malaysia, at least we didn't see them) came into the big arena. They passed right by us in four groups. It was very very beautiful and a fantastic end to a fantastic day!
Written by Mara at 08:00