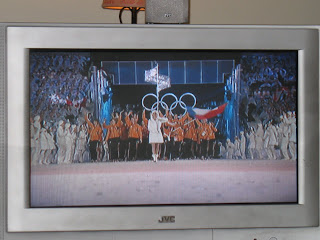 The entrance of the Dutch athletes

Well, I stayed up until 3am (that is three o'clock in the morning!) to watch the opening of the 21st Winter Olympic Games. I had several channels to choose from, all coming with their own commentary. However, Dutch, German, Belgian, French, Italian and Spanish television will all have to translate the used language (English) into their own language, so in the end I opted for the BBC.


Well, what else can I say but: I loved it! It looked fantastic, it looked beautiful. I thought the fact the athletes were able to watch the show was brilliant. The music was great, especially k.d. lang's song, which brought me to tears (I admit it). 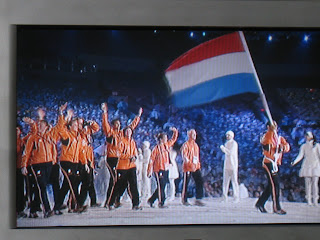 I felt a bit sorry for Catriona Lemay since she didn't have a column to light. I thought Croatia (Jakov Fak), France (Vincent Desfrasne) and Romania (Eva Tofalvi) were brilliant for allowing a biathlete to wave their nation's flag. I had more tears come when Georgia walked in minus Nomar Kumaritashvili. I smiled when I saw several African nations come in and I felt pride when I saw the Dutch team walk in. And according to Hazel Irvine, the Orange Horde/Army was present and drinking lager!


Congratulations to the Canadians for a wonderful opening to the Olympic Games. For the next two weeks the Olympic Flame will be burning...
Written by Mara at 15:46