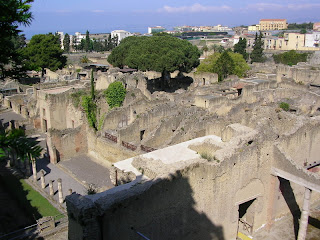 
Also known as Herculaneum, but that doesn't start with an E! Ercolano (which is the Italian name) is situated below Naples in the south of Italy. And when I say below, I mean below!


As you may know, the Vesuvius erupted in 79aD, covering all of Pompeï in toxic ash, killing most people who lived there. But not only Pompeï was affected, other communities in the area were hit as well. Ercolano was a thriving sea-side resort for the Romans and when Vesuvius erupted it wasn't covered in ash like Pompeï, but in lava. And the town disappeared underneath a thick layer of it.


Forward several centuries and a gentleman in Naples wants a well. He starts digging and digging and hits a hole. A big hole and he decides to investigate. And soon he and others start realising there's a whole other town beneath their town! One little problem though: where Pompeï was covered by nature, Ercolano was covered by Naples and its outskirts!


They did uncover part of the old town of Ercolano, finding a lot of fire damage (hot lava will do that), but also small treasures like beautiful art. However, the majority of the town is still covered by the new town up above and unless they are all willing to move away, it will probably remain like that! As you can see in the photo: the old town is in front and the new town is in the back.


For more E-words from around the world, please check out ABC Wednesday and join in the fun!
Written by Mara at 00:02