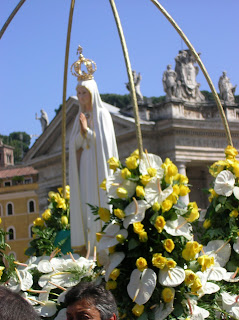 
When I was in Rome the very first time (2007), I also visited the Vatican. After my group had gone off to wander the streets of Rome a bit more, I still hung around the square in front of Saint Peter. There were fences everywhere and people were gathering alongside those fences. The majority of those people was female and they were all wearing flowers, special shirts, special scarves and tears in their eyes. So, I got myself a good spot and waited, because what else can you do?

After an hour or so the tension was mounting. The speakers blared Ave Maria over and over and women were crying and chanting along. And then, all of a sudden, a helicopter appeared. The women got into a frenzy now, trying to get the best spot to see. I let some of them stand in front of me (on account of them being on the smaller side), but they hardly had time to thank me, because it was coming! 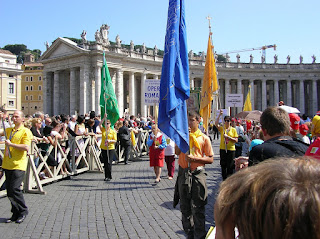 Now, I still didn't know what was coming, but it was great to see it all unfold. Underneath the helicopter was a statue! After the statue was brought to earth safely, the procession started. Now, any Catholics out there, please forgive me if I don't know which is which, but in some order there arrived Choirboys, Priests, Cardinals, Chaplains and after they had all passed, the women (and men). In one big line towards Saint Peter for a special Mass! 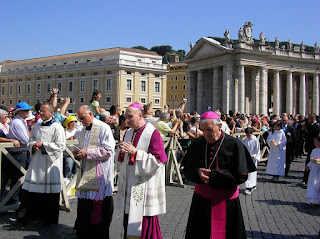 Right before everybody disappeared however, I grabbed hold of one of them and asked who and what. In 1917, at the height of the Great War, two children were playing when all of a sudden they saw a statue of Maria weep. It made headlines of course and the town where it happened (Fatima in Portugal) became a place of pilgrimage. Ninety years later, the fact that Maria had weeped was celebrated in the Vatican! 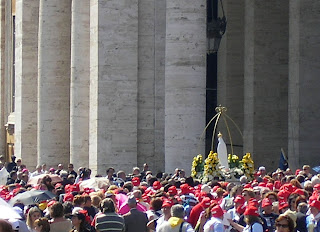 For more M words from around the world, please check out ABC Wednesday and join in the fun!
Written by Mara at 00:02