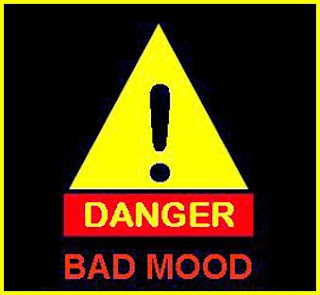 I don't often have a really bad day mood-wise, but yesterday was a top one! It was alright until about 10am when I woke up. A few minutes later I got a call from my boss: instead of doing my own shift, I now had to do another shift, doing the same as the day before. Driving for twenty mintues, standing still for twenty-five. So, I was in a foul mood!


Anyway, as I drove towards the starting point, my mood dropped and dropped until I feared it would go underground. I started work and my mood didn't lift. In the end there was only one thing for it: sweets! So, I got myself a big bag of marshmellows and three chocolate bars and went away to become merry again.


It didn't quite work out that way, but eating the marshmellows certainly helped me get out of the doldrums enough to become half way okay again. Not completely mind, that was asking a bit much.


And what's in store today? The same shift as yesterday! Up and down the dike. Fortunately I still have my chocolate bars left over from yesterday...
Written by Mara at 12:40