How Jane Austen dealt with the stricken 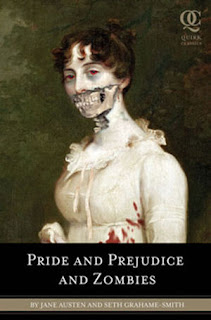 "It's a truth universally acknowledged, that a zombie in possession of brains, must be in want of more brains"


Several months ago (it must have been June), I was wandering in a bookstore in London when my eye was caught by a book. Of course this is not unnatural if you're in a bookstore, but this book was a bit different. It was about zombies!


Zombies and me don't really mix. I've never encountered one, I've never seen one (bar the ones in Michael Jackson's Thriller-video) and have never really felt the urge to read about them. Until...


I am a great fan of Jane Austen. Pride and Prejudice, Sense and Sensibility, Persuasion, Mansfield Park (not too fond of Emma or Northanger Abbey), I've read them time and time again. So, when I wandered through that bookstore and saw a book called "Pride and Prejudice and Zombies", it wasn't a normal thing for me to pick it up. But, I figured, anyone who can come up with a title like that, deserves my money for the title alone. So, I bought it. Brought it home with me. Started reading it. Put it away again because of the stupidity. Couldn't find it anymore.


Fast forward about three months. During all those boring days on rail replacement service recently, I needed something to keep me sane (apart from chocolate). So, I went out to find the book again. Which I found again in the end and put in my bag to take to work.


Despite the large number of (random) killings, the introduction of a few new characters (needed as zombies) and the killing of a few favourites, the book was actually quite funny. There were even several moments where I laughed out loud.


Now, on account of me telling the world that I was reading this book under the little header of 'on my nightstand', I got an e-mail several weeks ago. Some lady from some publisher's office in the USofA had seen I was reading this book (or trying at the time) and was wondering whether I would like to be put on their mailing list. And then a couple of days later I got another e-mail asking me whether I would like to try 'Sense and Sensibility and Sea Monsters'. So, I sent an e-mail back with my address and lo and behold: yesterday afternoon a package from the USofA arrived. Containing said book. So, despite me not being a fan of the fantasy-horror-creepy genre, I now am in proud possession of not one, but two of those books. Hopefully the second one will prove to be as good as the first!
Written by Mara at 06:00