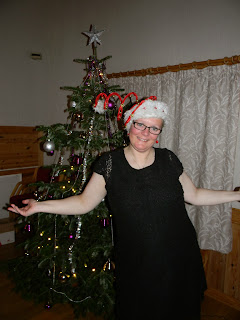 On Saturday evening we had our Christmas party. I got picked up by a colleague who lives quite close by and we made our way to the venue. In previous years they had organised the do at a local hotel, where there would be several Christmas parties going on at once. Which was never that nice, since there were a lot of strangers, drinks were expensive and people would therefore make their way to hotel rooms to drink their own stuff. So, this year they decided the do would be held in another type of venue where we would organise the whole thing ourselves.

Well, it was more like the staff parties I used to organise. But with more resources of course. And it was great fun. Everybody came dressed up in their finest: men in suits with ties, women with nice dresses and of course I was no exception. I had a lovely black dress that shimmered (yes, a new one) and my fantastic red shoes. Plus I had found my Christmas hat, added some bells and was raring to go. 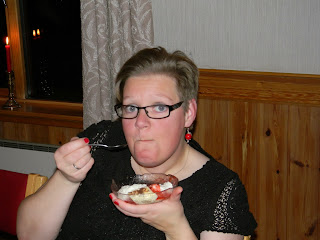 The food was proper Norwegian Christmas food: ribs with crackling on, which made me go back for seconds and stick meat, which is lamb/mutton on sticks that has been dried, then rehydrated and cooked and served. Not my favourite. Dessert was Queen Maud pudding, which is named after the first Queen Norway had after its independence from Sweden.

The drinks were cheap: Turkey prices as they said. And I tried several: white wine (2), dishwater (1) and a whiskey, courtesy of a colleague. The dishwater was something I started with and contained vodka, sprite and two other ingredients. It contained such a kick however that I was already half drunk by the time I had finished that!! So, I quit that and stuck to what I knew.

Halfway through the evening there were prices handed out. Or more accurately: certificates. They looked at the past year and tried to see who fit what description best. When the host came to the bravest driver, he started talking about seeing nature for a long time and not expecting to see the actual driver make it to the end. He was however very impressed when said driver did make it. Nearly on hands and feet, but the finish line was met. Somewhere in that story he mentioned Aurlandsdalen and I realised he was talking about me! Another unexpected price!

After all that, the music started and I danced a bit, switched to soda, danced a bit more, took photos and at the end of the night, me and a colleague were taken to a hotel where we would stay the night. It was a good night.
Written by Mara at 07:00