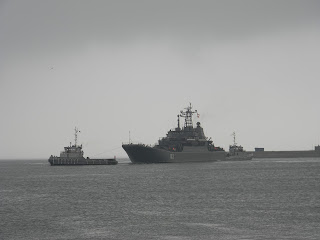 
Kaliningrad is a town in Russia, but situated in a part of Russia between Lithuania and Poland. It used to be part of Prussia and was called Königsbergen until 1946. It lies on the Baltic Sea. But not only is it a town, it is also a naval vessel. And a fairly big one at that!
As I was at the Navy Days in the Netherlands this year, we saw this ship arriving and being moored. It's always amazing how they do that: the steering is somewhere at the back, which goes against all I believe in. Then again, they might be lousy at parallel parking a coach!
This is the letter K for ABC Wednesday. Why not join?
Written by Mara at 07:00