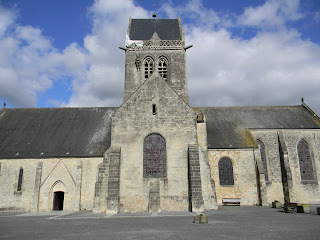 
John Steele was an American paratrooper who fought in Europe during the second world war. He was with the 82nd Airborne Division and was dropped from a plane on D-Day over the small French village of Ste-Mère-Église in Normandy. As bad luck would have it, that evening a fire had broken out in one of the bigger houses in the center and the Germans and the French were busy putting out that fire. So, when all of a sudden a lot of men come falling from the sky, the were quickly noticed and the firing started.
Some of the men landed in the countryside, others in the village, some were shot and some survived. John Steele? He got caught on the church steeple smack bang in the middle of the village. He got shot in the foot and decided his best chance of survival was playing dead and he hung on the steeple until the Germans got him down. Upon realising he was still alive, he became a prisoner of war and was locked up. However, he managed to escape and rejoin his division.
John Steele survived the war and passed away in 1969 of throat cancer, just a few weeks short of the 25th anniversary of D-Day.
This is the letter J for ABC Wednesday. Why not join?
Photo taken in March 2012 in Ste-Mère-Église, France
Written by Mara at 07:00