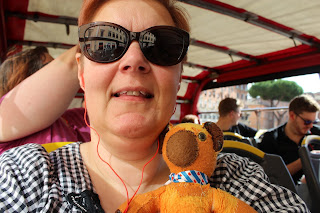 
Here I am again, with more stories and photos of our trip to Rome! And today I am going to show you some of the statues we saw. I already showed you one the other day of that beautiful sculpture with the angel. I will show the whole thing soon, but not today. 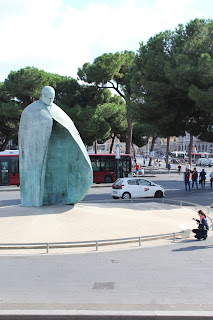 You may recall that the Vatican is situated within the Roman city boundaries, but it is actually its own city state with its own head of state which is the Pope! Right now the Pope is Pope Francis who originally comes from Argentina, but before him there was a German Pope (Benedict XVI) and a Polish Pope (John Paul II). He has been made saint already and this statue we saw close to Termini, the central station of Rome. 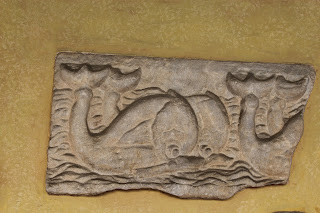 Over the past couple of days I have shown you some smaller fragments of statues as well. Those we found in Saint Paul's Basilica, where they had lots of them. They found them years ago and they have embedded them in the walls of the cloisters. We saw a foot, several heads, bits with writing and some animals. I loved this one and it reminded me a bit of Jonas and the Whale. 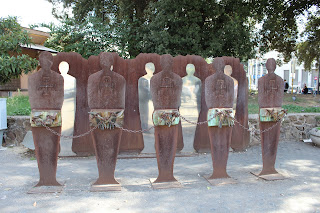 Almost all the statues and sculptures we saw were either Roman or Christian, but there was one piece that had a more recent influence. Italy during World War II sided with the Germans at first and during that period, Jews, Gypsies, Jehovas Witnesses, Homosexuals and political opponents were taken away to camps to perish. This was the only monument we saw, although Mara said there were some stones throughout the city, outside the houses Jewish people were taken from. And even though we always looked downward so as not to fall, we didn't see any. 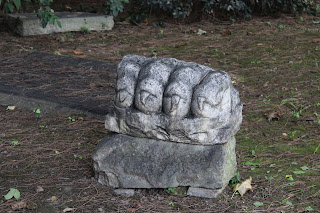 On our walk along the Via Appia, we came across the bathhouse remains and in that same area we saw this. Mara said it looked like four birdies have a conflab, but I think it looks like the claw of one giant beastie! What do you think? 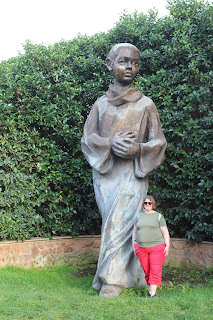 Sometimes small is actually quite big. On that same Via Appia walk, we came across this statue of Tarcisius, patron saint of altar servers. We thought it best that Gera posed next to him, as he was quite large(!). Tarcisius was killed by pagan Romans for not wanting to desecrate Holy Communion which he brought to sick and imprisoned Christians in Rome. He was probably stoned to death, although that is not certain. 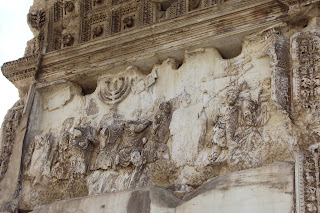 My last offering of today is a scene on the Arch of Titus (Forum area). In the first century there was an uprising in Judea against the Romans. The Romans won and destroyed whole cities. This image shows the triumphant arrival of the Menorah from Solomon's/Herod's Temple in Jerusalem. Most of the gold, silver etc that was taken from the Temple was sold off to pay for the building of the Colosseum. The Menorah was probably melted back to gold before becoming something more precious to its new Roman owner. Perhaps a little gold teddy bear?
Written by Mara at 10:06