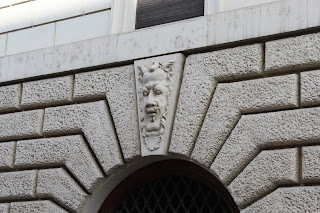 
No! I didn't learn Italian, just that one sentence. It means that I am showing you more. More of Rome, because you may have wondered about certain sights.

In the end Mara was defeated and we left the group and the guide to continue on their way. We went to find a place to sit and watch people go by. We chatted to a lovely lady, we saw people go by (jealous of our spot I think) and once we were a bit rested, we walked around the Colosseum ourselves.

It was big. Like really really really big. The guide had told us that there was room for so many people in the olden days, that if they would have used one door only, it would have taken them a day to get in and find their seats. Wow! But those Romans were clever and made so many gates, everybody could get in within twenty minutes. Much better.

In the central area of the Colosseum there used to be trapdoors through which wild animals would have come up. Lions and bears and they would have had to fight with gladiators or Christians or each other. I think. It sounded not very nice, so I didn't hear everything.

The Colosseum stands in an area with a lot of other important Roman stuff. Like the forum, although there were a few of those apparently. The guide showed us a ruin that he said used to be the home of somebody. Their dining room was bigger and higher than our entire house! They sure did have some money, those Romans. Or stole some money... 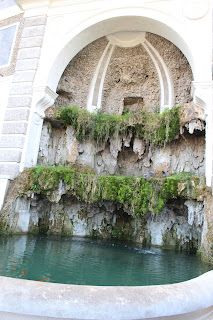 We were quite tired after all that walking around and we weren't yet finished for the day either, because that evening we took a boat ride. More on that soon...
Written by Mara at 13:47